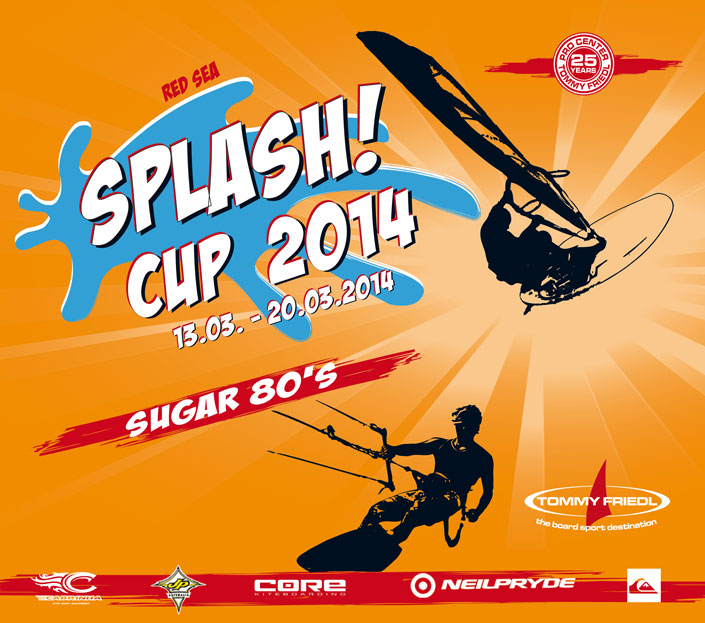 One week of fun-regatta for windsurfers and fun-courserace for kitesurfers connected with beachlife and some specials like BBQ, cocktailparties, adventure quad safari, sundowner and more…
Because of the 25 years jubilee of the ProCenter Tommy Friedl in Hurghada, there are a lot of stories to tell, there exist a lot of photo documents and because many surfers' and kiters' friendships were build up here, it's the perfect possibility to meet at the beach of the Jasmin Village.

One week of fun-regatta for windsurfers and fun-courserace for kitesurfers connected with beachlife and some specials like BBQ, cocktailparties, adventure quad safari, sundowner and more…
Because of the 25 years jubilee of the ProCenter Tommy Friedl in Hurghada, there are a lot of stories to tell, there exist a lot of photo documents and because many surfers' and kiters' friendships were build up here, it's the perfect possibility to meet at the beach of the Jasmin Village.

The preparations are going full speed today…
we are ready…let it splash with the Pro Center Team!
... Welcomedrink for our racers at the Aloha bar and first sight on the nice, brandnew  Cabrinha Kiteboards for the winners!

Day 2 of the Splashcup starts with a relaxing fruit breakfast  at the Aloha bar.

In the first skippersmeeting Tommy explains the course for the racers and the office angels give out the numbers for the two starting groups.
The choice of the material takes place under high adrenalin.

The first race begins already at 13:30 h, because the wind spoils us far in excess with over 35 knots.
The 5 heats are going full speed…Klaus does the Boombreaker and Uli focuses on the wrong wheels – to say board size, Adam is still searching for the right tons and looses his orientation…anyway all riders are fully motivated and give one´s eye teeth for the first place.

The happy winner of the day Klaus is all smiles while he returns to the beach, like the runner ups Wolfgang and Paul.

All racers and the full throated audience are in great mood with strong gusts of wind at the ProCenter beach.
The long arms were reloaded with delicious camel steak and fresh fish in the evening at the Villa Kunterbunt.

Uli and the winner of the day Klaus 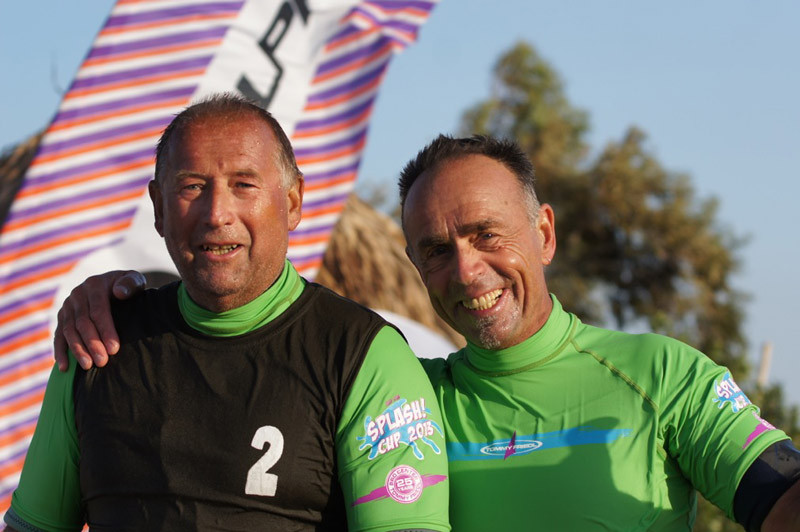 In the beginning of day 3 Ahmed spoils the guests with a delightful fitness breakfast as usual in great atmosphere at the Aloha bar!

The wind definitely deserves a break today, after he offered us yesterday an excellent race day with 30 knots and more! What stands more to reason than attract the watersport addicted people with a SUP Race?

With Alois Mühlegger we have a real specialist for SUP at the place, who organized in the twinkling of an eye a gorgeous SUP Race!

The enthusiasm for this low wind alternative is directly reflected in the high amount of starters. 24 paddlers could ride 11 heats and at the end of the day the winners in the men´s and and the women´s range are fixed.

The award ceremony can´t be passed off without splash – so the Jasmin beach transforms to a sea of supersoakers , which doesn´t leave one Lycra shirt dry.

At the end of the day our Pro Center team is cooking for all and invites everyone to our legendary BBQ with fresh fish, Calamari, grilled vegetables and Bavarian potato salad…basics for the best Mojitos in whole

Hurghada! Special thanks go to Alois Mühlegger for the organization of the great SUP race, which every member enjoyed a lot!

Slogan of the day is „Lazy Sunday“.

The wind and our guests have a rest from the eventful days before. So the breakfast at the Aloha bar is celebrated in an extended way and our Siesta Maker beanbags are the place to be for reading, relaxing, sleeping and chatting.

During the course of the day the wind revived a bit, so that the JP Super Lightwind boards, the 10 m² sail of  Neilpryde and the SUPs can be used. For all interested people Magda (Trainer of the Polish racekiting team) was giving a seminar about racekite material, in which she figured out the obvious differences to the usual kitesurf equipment.

To fade out the Lazy Sunday, the ProCenter team serves a delicious Italian menu at the Aloha bar!

On day 5 of the Splash Cup the wind is back For the first time we organized a kite race this year. Magda (Trainer of the Polish racekiting team) was supporting us with expert advices and was coming to the fore of today´s kiteraces. All race members got prepared to the particular courses, while the busy beach fairies were spreading the tons on the water.

The first race was a battle between the racekiters of the Polish team. Maks came in first, Blasco was finishing second and Martin third. After a short replacement of the buoys the riders of the twintip class started on the adjusted triangle course. With burning thighs after 4 heats Felix finished first, then Denny came in second and Carsten third.

Tomorrow follows the second part of the kite regatta with 4 exciting heats in each class. Let´s see, who will be the lord of the board...

In the afternoon the surf community was heading to a quad safari in the desert. Under twinkling stars they enjoyed tasty steaks and said cheers with beer to the successful wind day!

The focus of the 6th Splash Cup day is the next kite regatta. After extensive breakfast the skippersmeeting for the race- and twintipkiters takes place, who ride the exciting final heats. The Polish national team starts first with the courserace finals. After 8 energy-sapping heats the winners are certain. Maks did again his best and reaches as first the finishing line. Blasko follows as second and Martin as third. Like yesterday also the racekiting girls launched the regatta. 16-year-old Elena from Russia, current world champion of the under 18 class, reaches the finish line first.

After the courserace the triangle course for the twintip race is set in the water. The  riders take-off at good wind conditions and are extremely motivated.

Felix and Denny provide an exciting neck and neck raceto win. Board and kite were controlled the best by Felix. He ranks first, Denny becomes second and Jan is third after 4 ridden heats.

Altogether it was again a great windy day, on which the kiters and windsurfers get one´s money´s worth. The evening faded out with a relaxing sundowner in the Aloha bar with Ahmed´s special Mojitos...

The wind welcomes us already in the early hours of day 7.

After the skippersmeeting begins the slalom race of the windsurfers with reduced amount of participants.

During the 4 heats Philipp and Klaus show a thrilling matchrace. In the end Klaus is the glaring winner and gets embraced and celebrated by the beach audience.

The completion of this year´s regatta is partied with a full range of holy colours, which   become splashed away with fully loaded supersoakers. Finally Tommy is multicoloured, Magda has blue hair and Mosty a yellow back of the head.

The surf community enjoys the rest of the day on the boards, because the wind offers perfect conditions throughout the day.

In the meanwhile Tommy´s office angel Yvonne spins the wooden spoons in the kitchen. The goodies for the Tex Mex dinner in the evening have to be prepared. At 7 pm the gluttony of the Mexican food begins. The guests enjoy the meal and the filled bellys become spoiled with icecold beer and Mojitos. Tommy adresses an assembly because of his 25-years-station-jubilee. Then office angel Birte congratulates in the name of the whole team on the anniversary. Afterwards the award ceremony begins…

The following ranking shows the position and the prizes, which were given:

After the award ceremony we started the legendary Splashcup party under this year's slogan "Sugar 80's". The creativity of the guests was huge regarding their dresses. The most imaginative and work intensive outfit of Susanne und Wolfgang got awarded with a voucher for a nice evening in the Villa Kunterbunt. Nice as these both party animals are, we received after the party the outfits made out of original 80s sails as decoration for the shop.

After this official part DJ Dani spoiled us with soaring flights of  80´s music and let the partycrowd dance like hell. While the dancers brought out the best of them, there started the tombola in which were great prizes of our sponsors JP, Neilpryde, Cabrinha, Core and Quiksilver to win, e.g. a brandnew Cabrinha kiteboard.

The partycrowd celebrated the anniversary extensively until the early morning! 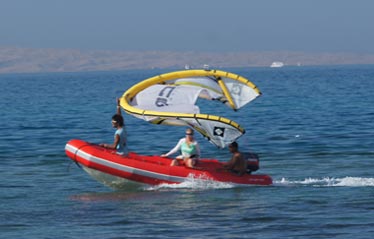 Safety always comes first.
Our Beach Assistants are always keeping a close lookout and our rescue boat is always on duty. 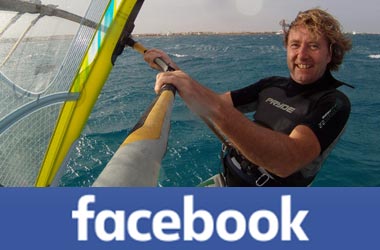 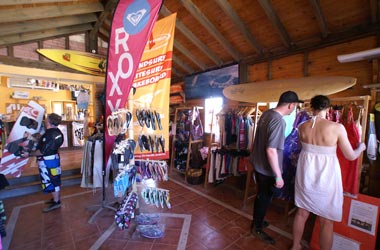 Directly on the beach you'll find our ProCenter shop. Here you can check out the latest beachwear fashion, sunglasses and all different kinds of spare parts. 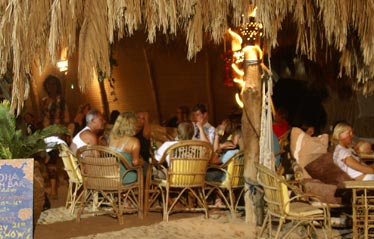 Sweet beachlife rounded off with a real espresso, fruitshake or cocktail. Our beach BBQ with bonfire and the beach parties are legendary. -- Life's a Beach! --